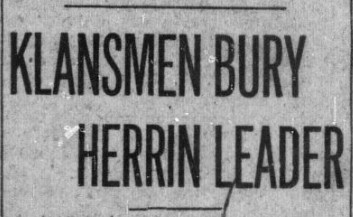 In 1925, Chicago’s The Daily Worker reported, “Klansmen are pouring into Herrin from all parts of the county to attend the funeral of Young to take place this afternoon.” The pro-labor newspaper continues, “Young was the Herrin ‘Inspector’ of the Illinois constabulary department, a private corporation with offices in Chicago, composed of klansmen and gunmen, and having as its officers prominent Chicago politicians and capitalist newspaper editors.”