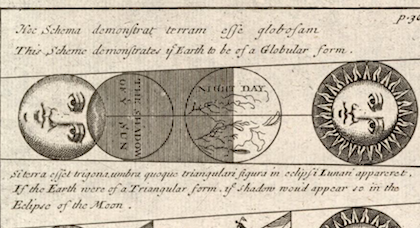 Compare the media’s portrayal of eclipses from the past.

For those witnessing a total solar eclipse in its path of totality, it can be an awe-inspiring experience. The lessons and the select list of annotated links to newspaper accounts of past eclipses can offer insights about how scientific reporting in the media has evolved over the last century. Also included are links to scientific drawings explaining the celestial phenomenon.

Newspaper articles listed here have been digitally archived at the Library of Congress Chronicling America Website.  Additional materials are from the digital collections at the National Archives.

1748 (George Smith and Edward Cave) Eclipse totality path maps and illustrations including hand colored depictions of the July 14th 1748 total solar eclipse as it was viewed from 24 different cities in Europe, North America, and Africa.

1843 April 21 (The Illinois Free Trader, Ottawa) An account of a solar eclipse on July 8, 1843, including a fascination with the “bizarre” behavior of animals. This type of scientific reporting in the news is in contrast to late 19th century reports that emphasize astrological concepts such as the sun’s corona and atmosphere.

1860 July 24 (Cincinnati Daily Press) This article about the coming July 18th eclipse offers brief accounts of an 1806 solar eclipse and cites examples from Shakespeare’s plays that reference the celestial phenomenon.

1869 August 4 (The Evening Telegraph, Philadelphia) A full-page feature including illustrations and articles about the August 7, 1869 total solar eclipse with a focus on “How it will occur and how it will be observed.”

1878 April 8 (New York Daily Tribune) In this article in the second column of page 4, the editor notes the dollars allocated to the US Naval Observatory to track Mercury’s orbit (and the potential for new planets to be discovered closer to the sun) but the “lame excuse” for Congress failing to fund a scientific expedition to observe the 1878 eclipse. (Funding for the expedition was eventually allocated.)

1878 July 16 (New York Tribune) This article includes an update about the US Naval Observatory’s pamphlet for observing the July 29th eclipse, including instructions for amateur illustrators. Is this an early example of citizen science (i.e. engaging the citizenry to help scientists compile lots of data)?

1878 July 20 (Chicago Daily Tribune) This full-page feature includes articles and illustrations of the 1878 eclipse, including directions for using colored glass to observe the phenomenon with the naked eye.

1878 July 27 (New York Tribune) This lengthy description of the science and lore of total solar eclipses includes several illustrations of the path of totality. Of particular note is the amount of attention the reporter gives to a vague “Hindoo” custom to ward off the “dragon’s mouth.” In the second column of the article, the reporter mentions the sun’s “unknown and probably highly rarefied gas” (or what would later be known of as helium).

1878 July 29 (Dakotaian) A description of the 1878 eclipse from a newspaper close enough to the line of totality to publish a “day of” report.

1878 July 30 (Staunton Spectator, Virginia) Overview of the history and science of a solar eclipse.

1878 July 30 (New York Tribune) One day after totality was observed, this front page article includes telegraphed reports from a majority of the eclipse observation camps in the western U.S. territories. Note those who had favorable conditions and what they reported as “successes” of their observations.

1878 July 31 (New York Tribune) Toward the end of this article about the 1878 eclipse is “Mr. Lockyer’s Views” summarizing the various reports from scientists stationed across the western territories of the U.S. including preliminary findings from a search for “intra-Mercurial planets.” Mr. Lockyer later discovered helium, the “mysterious” gas astronomers observed on the sun and was discovered about 30 years later on Earth.

1878 August 7 (Watertown Republic, Wisconsin) This article introduces readers to the recent 1878 eclipse and the scientists who set up scientific observation camps in the western U.S. territories. Also included is a report of Professor Maria Mitchell’s group. Note the author’s descriptions of Professor Mitchell and her “assistant nymphs.” This article is also featured in the lesson, “Women in Science and the Total Solar Eclipse.”

1878 August 13 (New York Tribune) This letter from Tribune correspondent W. Fraser Rae provides a helpful overview of his interviews with members of different eclipse observation sites, a listing of preliminary findings (including the supposed discovery of a new planet), and an interesting description—almost like a tourist travel guide—of the western territories and their communities and residents.

1878 Instructions for Observing the Total Solar Eclipse of July 19 (US Naval Observatory) This pamphlet includes instructions for photographers and instructions for those making sketches of totality with the naked eye since “accurate drawings of it will be exceedingly valuable.”

1922 September 22 (East Oregonian) This newspaper article mentions preparations for an eclipse that would be witnessed across Africa and Australia and noting the following year’s (1923) eclipse in US. Toward the end of the article, the reporter states, “After the one [eclipse] in 1923, the next total solar eclipse that can be observed under favorable conditions in the United States will be on August 21, 2017.”