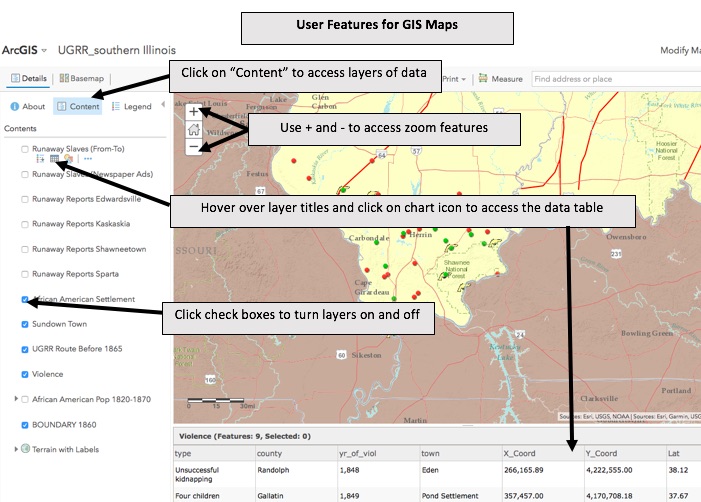 Facilitate students’ connections of evidence to the claims they construct about the past. Historians and historical archaeologists have come to very different conclusions about the Underground Railroad in southernmost Illinois. Using evidence scholars from both disciplines have collected and analyzed, students can draw their own conclusions.

Using the resources listed below and 3D scans of artifacts found at Miller Grove, have students cite evidence that supports their answers to the following essential questions: 1) How violent was the southernmost region of Illinois prior to the Civil War? 2) To what extent was there an underground slavery resistance movement in southernmost Illinois?

GIS (Online) Map: Underground Railroad and African American Communities in Southern Illinois   Explore “content” (data layers) such as the locations of African American communities, runaway slave notices, incidents of violence, and shifts in demographics in this interactive GIS map to support or refute the claim that there were “frontline operatives” in southernmost Illinois who assisted those fleeing slavery.

Miller Grove Artifact Activity Use this activity to guide students’ analysis of artifacts found during recent archeological digs at Miller Grove, a free-black community in antebellum southern Illinois with suspected ties to the Underground Railroad. Students will explore additional documents to support their claims about these artifacts and make inferences about the dig site.

Activity Resource: Artifact and Primary Source Images Access photographs of artifacts uncovered at Miller Grove and copies of the primary sources students can use as evidence to support their claims about these objects.

Activity Resource: 3D-Scanned Artifact Files Download and print these stl files so students can analyze replicas of the artifacts included in this activity.